I'm on my way to the NESCBWI conference in Fitchburg, MA, tomorrow. Cue lots of Thoreau-related humor (from me).

Meanwhile, here's Some Things I Did Today, Boston edition: 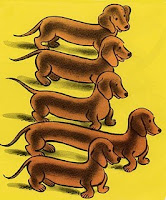 * Had great meetings with Houghton and Candlewick.

* In Houghton office, saw an upright piano that'd been handpainted by H. A. Rey, with Pretzel the dog all along the front of the case, and Cecily G. the giraffe adorning the side panel. It was the cutest thing ever - but I was too shy and dazzled to take a picture, it seemed rude. Apparently it had been in the cafeteria and they were like "oh, we're going to get rid of this" (!!!) so somebody rescued it.

* Ate lobster twice. Once in "roll" form, once on a salad.

* Stayed in an officially haunted hotel. I downloaded "Ghost Radar" app on my iPhone and confirmed it. :-) 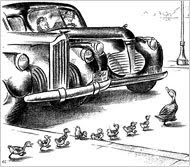 * Saw Ducklings. Made way for. 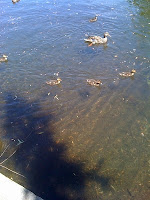 * Hung around the Boston Public Garden. Saw alleged "swan boat" which is NOT, as I for some reason pictured it, like a gigantic shiny boiled sweet hollowed out and made to look like a swan that you ride inside of.  Sad.

* Also did I mention, saw DUCKLINGS??

Posted by Literaticat at 9:19 PM