ONE DAY, in my early 20's, I was visiting a friend who worked in a pub. It was mid-day - there were a few customers eating sandwiches and having beers, but no other employees. Suddenly, her phone rang. It was a family emergency - she had to leave! She looked around - realized there was nobody to cover her. She tossed me the keys - showed me how to ring the register - and left me to cover the rest of her shift. Well.

This was a beautiful day in the French Quarter of New Orleans. Bars there don't just stand empty - soon enough some tourists came in, and some regulars - a couple of people I kinda knew, but mostly strangers. I'd never worked in a bar or a restaurant, but there I was, suddenly in charge - so what could I do? I had been to theatre school. . . so I acted like a bartender. I chatted. I poured beer. I mixed drinks. The thing is - mostly people ask for either beer, or for things with two ingredients - Jack and Coke. Gin and Tonic. Easy peasy! If something came up I didn't know, I'd turn my back for a minute and cheat with the Mr Boston's book.

When a tap ran out, I called that one "out of order." When the ice ran low, I filled a bucket. When the lemons ran low, I chopped up some more. When somebody asked about food, I scurried back to the kitchen to tell the (surprised, but not easily ruffled) cook. 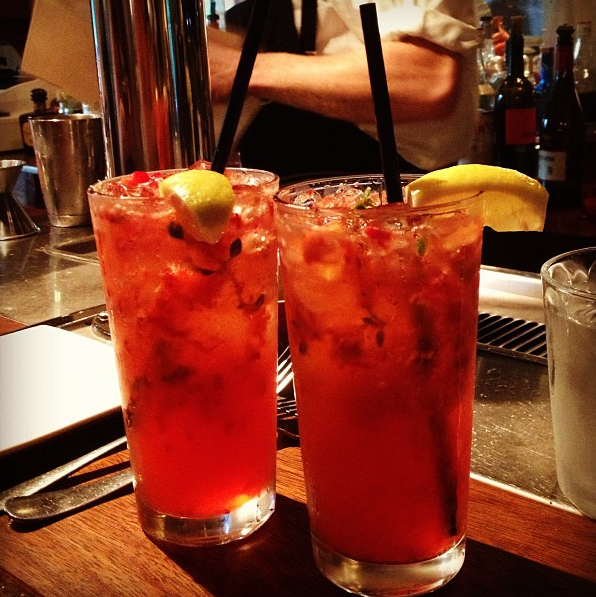 They gave me a job. Somewhere along the way, I actually did learn not only what I was doing, but also, how to be pretty good at it. Soon enough, I was training new bartenders. And I taught them my trick: POUR WITH CONFIDENCE.

The biggest mistake that most brand-new, totally un-trained bartenders make is . . . they are hesitant. They touch the bottles like they are about to break, and pour like they are pouring into a dainty dolly cup at a children's tea party. When they do that, customers totally pick up on it, even if it is subconsciously. When customers feel like they aren't in good hands, they get skittish. A hesitant or weak bartender will get fewer or lower tips, and they'll certainly have less fun on the job.

So even if you ARE new, pretend like you know what you're doing. Stand up straight. Look customers in the eye and smile. Actively listen to what they are asking for. Grasp the bottle firmly, and pour like you mean it. Give them what they want with a minimum of fluster and a bit of flourish.

I hear what you're asking. "OK well, thanks for the trip down memory lane, weirdo, but what does this have to do with ME?" Well, my little chickadees, the same principle applies to approaching agents.

If you were a bartender, you probably wouldn't introduce yourself to a new patron by crumpling up an old dishrag and throwing it at them, or by creeping up to them and bursting into tears. Those would be BAD INTRODUCTIONS. So. Begin as you mean to go on. When you are approaching an agent - DON'T say "I don't really know how to write a query" or "I don't know how to be a writer" or "I'm not really a writer" or anything of the kind. I get this all the time. Daily. But I mean - hello, this query letter is all I know about you.

Obviously there is such a thing as going overboard. If you say "this book will make your dreams come true!" or "I'm the second coming and a rock star rolled into one!" or "you'll be making a huge mistake if you pass THIS up" or similar . . . well that's just being a big-headed jerk-slash-crazyperson.

Don't be over the top -- but DO be confident and professional, even if you don't exactly FEEL those things. If you can do the wordy equivalent of standing up straight, looking the agent directly in the eyes, smiling, and giving them what they're asking for with a minimum of fluster and a bit of flourish. . . well, you may or may not get an agent this time, but you will both project and get respect.

Pour with confidence and get those tips, babies!
Tweet
Posted by Literaticat at 10:46 AM 10 comments: