How Does Your Garden (of words) Grow? 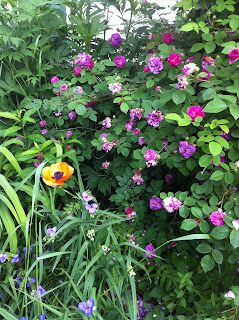 I have to preface this post by saying, I know nothing at all about gardening. I grew up in a city, with a little concrete patio that had some potted plants on it, which I dutifully forgot to water and killed every time my mom went out of town. Which was often. Then I lived in college dorms and apartments with no gardens or plants at all. So when I moved to the Hudson Valley, it was my first ever house with a backyard and a garden. The owners at the time paid a nice set of ladies to come and weed and take care of things out front. But now... now I own the house. And it is my garden to take care of. And gardening ladies are expensive.

So I - a total nature newbie - am now confronted for the first time ever with this PROFUSION of greenery that is mine to deal with. Most of the shady plants are doing fine on their own, but the sunny plants on one side of the house are at this point all taller than me, taller than the windows, quickly trying to consume the driveway and the house. It's chaos.

As I was outside today finally pruning it reminded me of what you writers go through in writing and especially revising your work.

First step: I put on my special pink gloves. I went outside with shears. And I looked at all the green madness. I really looked. It was pretty - VERY pretty - but also, to be honest, a hot mess. And how to fix it? I was overwhelmed at first.

The giant plants-that-I-don't-know-what-they-are were starting to encroach on the driveway. They are beautiful ... but my car needs to go there. So, though I wasn't sure what was OK to cut and what wasn't... I just had to go for it.  Cut. Cut. Cut. Oh wow - it's still beautiful - but now my car fits! And it all looks better actually!

That mass of green that is the prickly ancient giant miniature rose bush (giant bush, miniature roses) -- well, many of the roses are dead and can just be trimmed off. And in fact, it isn't just a rose bush. It has other plants winding around INSIDE of it, some of which are dragging poor Rosy's branches down. Some branches are clearly dead and are just weighing down the whole bush.

So I trimmed a few dead blooms off here and there. Fluffed some leaves. But no real progress until I TOOK A RISK. I had to decide, on purpose, to plunge my arms in. YES it scratched, but it was the only way to access the ivy and whatnot and cut it out of the bush, and really, though it stung to dive in like that, it was a thousand times faster and more effective than if I'd been dawdling around the outside parts for an hour. Then I had to take another risk and cut off pieces of the bush itself. I was nervous, because I didn't want to RUIN the bush - but they had to go. Not only dead branches, but branches that were alive, and even nice, but just too heavy.

And guess what? It is STILL a prickly ancient giant miniature rose bush. It is STILL sweet smelling and beautiful. But now it is actually much nicer looking, and much more likely to survive, because all the crazy stuff that was weighing it down is gone.

SO here are a few revision tips, culled from my first hour or so of gardening:

The only way to do it is to DO IT. This is how you prune the plants. You get suited up, put on the gloves, go outside with some shears, and start cutting. Peering at the plants from the porch, thinking about the plants, researching them online? None of those will actually prune the plants for you.

You will not succeed unless you take a risk. You WILL get scratched up. It WILL be a pain in the ass. Yes, it is hot and there are probably bugs out there. Oh well. If you don't work hard, you're probably doing it wrong. But it is immensely satisfying once it is done.

But how do I know what is a weed and what is a plant? My mom told me, "A weed is anything that is growing where you don't want it." Hm. But WHICH ONES?? Some of them are pretty! How do I know? "Just use your common sense and look. A weed is something that is choking out other plants."

Check for Wick. If a plant (or an idea!) seems dead, it might not be dead. Check and see if it is "wick." If there is any color there, clear the weeds around it. Give it some room to grow, and pat some fresh dirt around it, and give it some water, and some sunlight. See what happens.
Tweet

Posted by Literaticat at 7:46 AM