The hottest non-book item in the bookstore this holiday season was probably Spikeletz. They are awesome and weird bracelets made of this spiky-looking (but actually ultra-soft) plastic, in all kinds of wild color combos. Kinda like having a neon caterpillar around your wrist.

Most people like the Spikeletz. Some adults are sort of weirded out by them, because their texture is so unexpected compared to how they look. Girls and boys seem to appreciate them fairly equally. But one parent was overheard to say to a son, "Bracelets are for girls."

I wish I had been there. Because I would have said ok first of all WHAT and second of all NO and also CALL THEM WRISTBANDS THEN and by the way YOUR KID LIKES SOMETHING WHY ARE YOU GONNA RUIN IT and also SPIKELETZ ARE FOR AWESOME PEOPLE! Actually I probably would have said none of that, but I might have slipped the kid a wink and a sticker or something at least. Ugh.

So then today I was reading my twitter feed (as one does) and I came across this innocuous tweet from @HarperChildrens (a publisher I greatly admire), about the darling new book FOXY:

I have to admit, I was irritated by that tweet. I mean - why say it is a GIRL book? Because the human child in is a girl? But Foxy himself is a boy fox. And MAGICAL FOXES seem to be totally rad regardless of gender. If I was a boy, I'd sure as hell like a book about a cool MAGICAL FOX. Why not?

The thing is, in the kids section, so many picture books scream BOY BOOK or GIRL BOOK from a hundred yards. FANCY NANCY is a "Girl Book" - it's covered in glitter and is bright pink. I STINK is a "Boy Book" - it's got a giant trash truck on it. It is very simple for adults to choose "the one that fits" without even having to read the text. It makes life easy in some ways. But it's also so, soooo irritating.

I mean, OK. If a boy loves trucks, am I gonna say "No, you can only read about Princess Barbies"? Heck no. I'll give him a truck book, and we have plenty of them. But if a boy wants to read about Barbie, I am never going to say he's wrong. And the same goes vice-versa. I'm in the business of getting kids to read and love reading, I'd not want any kid to feel shamed for what they enjoy. 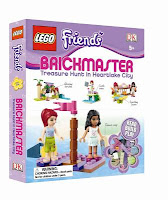 Goodness knows, pink glittery books don't need my help to sell! Nor would I want them to. I know that the masses of money a publisher makes from something like PINKALICIOUS may well go to buy some less obvious texts... maybe even one of mine. And heck, I loved pink and purple and glitter* when I was little, and I know I would have adored stuff like Lego Friends: Treasure Hunt in Heartlake City even though I may find it gagworthy now. (For the record, I loved firetrucks too!)

I can't stop publishers from producing and marketing books the way they do. Hey, they are companies, they are doing what makes the most money for them, and I get it.

But what I CAN do on a day-to-day level is, make even more of a point to seek out less-discovered gems, books that reflect all kinds of experiences, and try to push THOSE as much as possible. And I can stop using language like "Boy Book" and "Girl Book", and try to get others to stop using it too. It's shorthand, and it's lazy, and if it makes any kid feel bad or NOT want to read something, then it's a terrible shame.